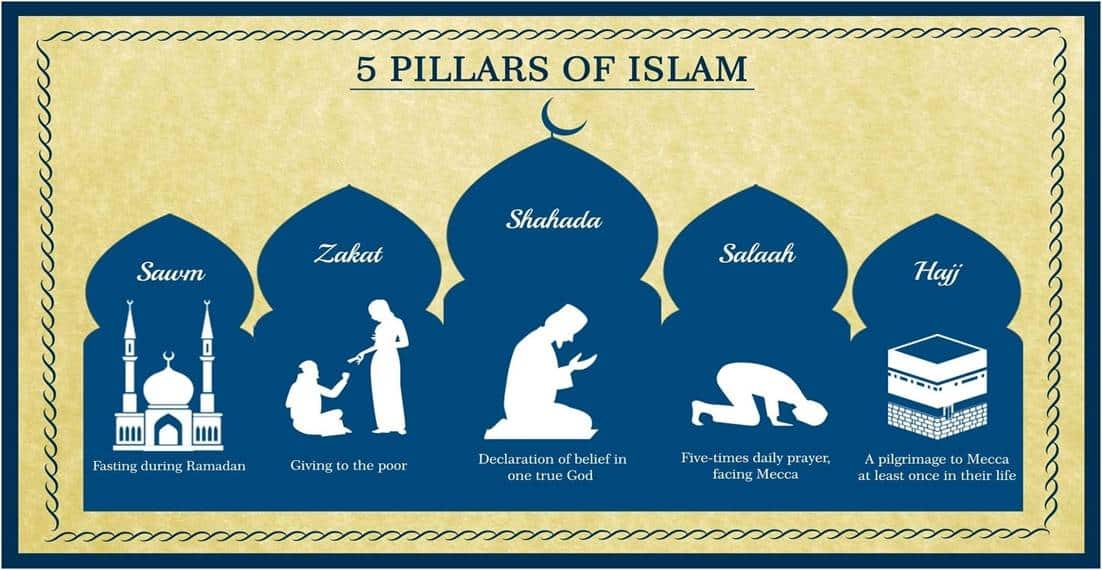 Agreed, Abu Abdul Rahman Abdullah bin Umar bin Al-Khattab narrates that I heard the Messenger of Allah saying: Islam is based on five things: to testify to the fact that there is no God but Allah and that Muhammad (peace be upon him) is the true Messenger of Allah, establishing prayers, paying Zakat, Performing Hajj and fasting in  Ramadan. (Bukhari and Muslim)

In this blessed hadith, the Holy Prophet made it clear that Islam is like a building and is based on five things. These five things are at the level of the pillars of the building on which the building stands.

Or Islam can be similar to a “building” in the same way that a tall and beautiful building cannot survive unless there are pillars beneath it. Similarly, there are five basic pillars of Islam without which no human being can sustain his Islam. These five pillars are mentioned in the above-mentioned hadiths.

And that is the belief of Tawheed (monotheism) and  Risalat (prophethood), Prayer, Zakat, Hajj, and Fasting. It is obligatory for a person who wants to become a believer and a Muslim, that he should base these five pillars on the basis of his religious, intellectual, practical, and moral life.

Then just as the splendor and beauty of a building depends on the decoration of the wall, so the beauty and perfection of Islam also depend on these deeds which are constructed from the duties and obligations and mustahabb, but here in the hadith, since the basic things of Islam are meant to be mentioned, so we will mention them.

What are the five pillars of Islam?

Islam is based on five things:

Testimony toلا الہ الا اللہ is to bear witness that there is no true God but Allah. This is the word Tawheed. Without it, one’s Islam cannot be valid. It is important to say this sentence, understand its meaning and act according to its requirements.

After these two testimonies, the most important part of Islam is prayer. It is obligatory to pray five times a day and night. That is why it is the foundation of a strong bond between a servant and his Lord. Prayers should be performed correctly as Prophet Muhammad (peace be upon him) performed.

Zakat is a financial act of worship that is obligatory to pay, once a year on the completion of the financial year or on the full ripening of earthly grains, fruits, etc. This is beneficial for the poor, the needy, and the destitute. That is why it is mentioned in the hadeeth before Hajj and fasting.

It is physical and financial worship. Because a person performs it himself and also spends money, Hajj is obligatory only for those who can afford it.

These five pillars have a fundamental position in Islam. Just as the depth and strength of the foundations are necessary for the stability of a building, the maturity of Islam is impossible without a deep and strong faith. And just as decoration is necessary for the renovation of a building, so too the building of Islam is adorned with good deeds. On the contrary, according to some scholars, the existence of faith is not adorned without deeds. Therefore, the Holy Prophet of Allah said in this hadith:

“Islam is based on these five things which mean that in their absence this building will disappear completely”.

On the contrary, the Prophet (peace and blessings of Allah be upon him) placed the standard of friendship and enmity on these pillars so that the protection of life and property of those who follow it will be guaranteed. Otherwise, his life and property are insecure in the eyes of Islam.

Also Read: Why is Islam the Best Religion?

It is narrated on the authority of Hazrat Abdullah bin Umar that the Messenger of Allah (may Allah bless him and grant him peace) said:

“I have been commanded to fight the people so that they may testify that there is no true god but Allah and that Muhammad is the Messenger of Allah. Establishing prayers and paying Zakat. When they do this, they will save their blood and property from me. Except for some Islamic rights and their reckoning will be on Allah”. (Bukhari)

Why is Islam the Best Religion?

How to do Wudu (Ablution) - Step By Step Guide For Beginners